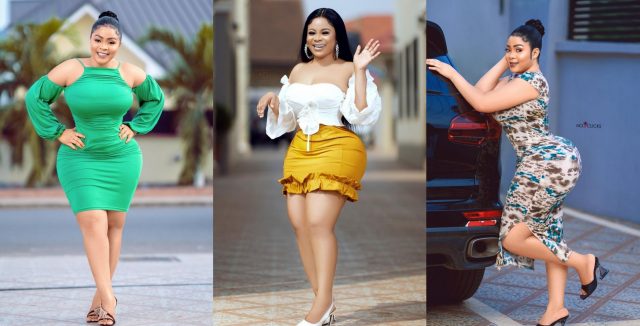 Actress, Kisa Gbekle has revealed why she went under the knife in a fresh interview with Abeiku Santana on ‘Atuu’ which was aired earlier today on UTV.

Ladies are under so much pressure to look beautiful and stay beautiful all the time and it seems that  pressure got to actress Kisa Gbekle as she reveals why she had to do surgery so she can have her current shape.

Kisa Gbekle who is undoubtedly one of the most beautiful and curvy actresses in Ghana has been in the movie industry for some time now. However, it seems this current body came at a cost. In an interview with Abeiku Santana which lasted for almost an hour, Kisa was asked a series of questions which includes personal ones as well.

RELATED POST:   Actress, Kisa Gbekle Reveals Why She Had To Do Surgery To Have This Banging Body [Video]
”]

According to her, after she had her baby in the U.S a few years ago, she lost the body or shape she had before so had to go for tummy tuck so that her stomach will become smaller and nicer. Because to her, the new look she had after giving birth is not the real her hence had to spend money to do surgery.

She justified her action by saying that as humans, we must try to correct things which we are not happy about in our lives and in her case hef stomach and body is one of them.