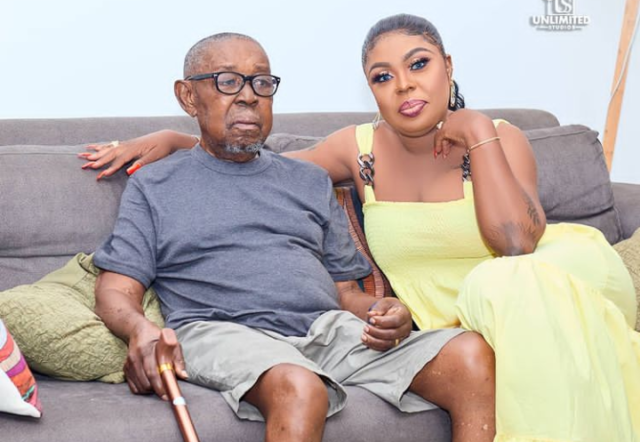 Afia Schwarzenegger cannot hide the joy of having to see her almost 85 years old father survive cancer even when some doctors predicted that he can’t live past 6 months 3 years ago.

Controversial Ghanaian actress and queen of Ghana comedy took to her instagram page to express her happiness for the life of her old father.

According to her, doctors in Ghana predicted that her father couldn’t live past 6 months when he was diagnosed with cancer 3 years. Hence she had to take him abroad to get him treated and today he can do basically everything without the aid of anyone.

READ ALSO: VIDEO: Yaa Jackson Gives Free Show On Stage Days After Brother Said She Was Being Used By The Devil

She took the opportunity to hit back at critics who gossiped about her for taking her father abroad for treatment. To her those who have a problem with that are stupid and wonders if stupidity is in their DNA.

Her caption reads “This is my father, turning 85 soon… Survived cancer even though we were told by doctors he couldn’t make it past 6 months… It’s been 3 years and counting by the Grace of God. He walks, feed and bath himself at this age with no stress.

READ ALSO: “Give Thanks To Fraud Not Your Effort”- Medikal Blasted For Saying He Misses Being Broke

I pray today for long life and good health for whoever is reading with no malicious intentions. Those of you that have problem with how he looks can come and adopt him and keep him in that hospital you are suggesting since you are wiser than your soul.

Take your father to a hospital abroad, really? Of I can afford doctors from South Africa and America, what more of a father to 6 successful children do you want the role call?