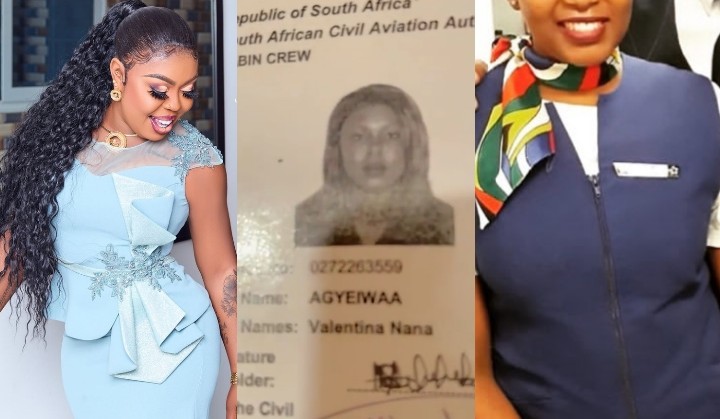 Controversial Ghanaian actress and queen of Ghana comedy, Afia Schwarzenegger has finally dropped another evidence that proves she was once an air hostess in South Africa.

Earlier this year, Afia Schwarzenegger was challenged by the likes of Mona Gucci that she was never a cabin crew member of any airline in South Africa.

READ ALSO: “I Count My Blessings When I’m Bored”- Shatta Wale Says As He Puts His Cars On Display [Watch Video]

At the time, the only evidence she had was a throwback picture of her and an alleged pilot at a location she claimed was Congo.

However, it seems she never forgot the trolls at the time and has finally dropped an ID that proves she was a licensed cabin crew member.

She showed this piece of evidence in a video that shows clearly an ID issued by the South African Civil Aviation Authority with her full name and picture clearly visible for all to see.

With this new proof, she will hope that the debate on whether or not she was indeed an air hostess in South Africa will stop.