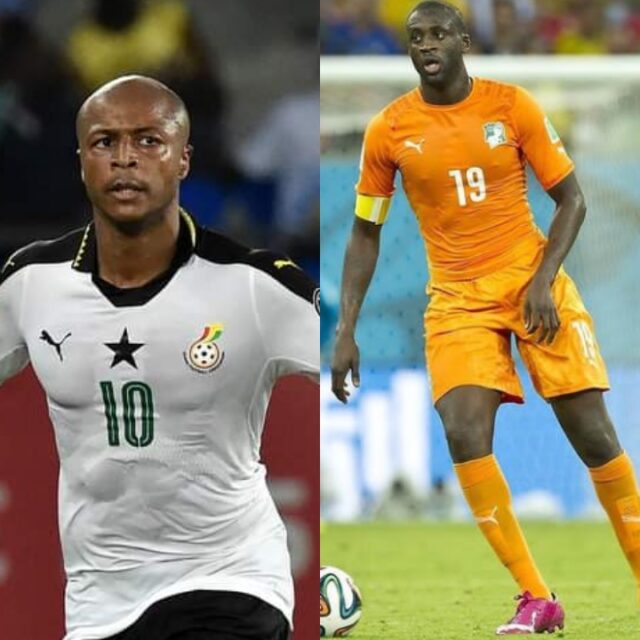 The game of football is one that is loved by many and we happen to be blessed with African brothers who coincidentally played in the same national team. These are brothers who have played in at least one match together.

This article therefore takes a look at top 5 African brothers that played in the same national team.

The Katongo brothers have represented the Zambian national team since 2003.

Christopher made his debut in 2003 whiles his younger brother Felix Katongo joined him a year after and they have gone on to do great things with the 2012 Africa Cup of Nations trophy been the major highlight. Christopher Katongo won the player of the tournament at the 2012 AFCON in which he was the captain of the winning side.

The Kingson brothers are yet another siblings that featured on the same side at the National level. Richard Kingson played as a goalkeeper whiles Laryea Kingston played as an attacking midfielder or as a right winger.

These two African brothers featured together mostly between the early 2000s and 2010. Richard was the vice captain for the Ghana National football team during his playing time and was voted as an All- Star Goalkeeper during the 2008 African Cup of Nations Tournament in Ghana.

READ ALSO: 9 Reasons Why You Need To Discover Your Talent.

Another African brothers who played in the same national team is the Toure brothers. The eldest Toure ie. Kolo Toure was born March 19, 1981 is a former Ivorian footballer and currently a coach. He is the second most capped player for the Ivory Coast with 120 caps from 2000 to 2015. Kolo Toure has represented his nation at 3 FIFA World Cups and 7 African Cup of Nations tournaments between 2002 and 2015 winning the later in the process.

Yaya Toure is the younger one and both players happen to play on the same national team. Yaya currently plays for Chinese Super League Club Qingdao Huanghai. He joined his elder brother in the National team since 2004. After the retirement of Didier Drogba in 2014, Yaya Toure was named captain of the side. He then led his side to win the 2015 AFCON in Equatorial Guinea.

Andre Ayew currently plays as a winger for championship club Swansea City and the Ghana National Team. He is the second born son to African great Abedi “Pele” Ayew. Andre Ayew was named the BBC African Footballer of the Year and Ghanaian footballer of the year in 2011.

Jordan Ayew is the younger brother of Andre born to the former Ghana captain Abedi Pele. Jordan currently plays as a forward for premier league side Crystal Palace and Ghana National Team. He joined his brother at the international level in 2010 and made his first appearance for Ghana on September 5, 2010.

Bakari Kone is an Ivorian former professional footballer who played as a winger whiles his younger brother Arouna Kone played as a winger. He made his international debut for the Ivorian national team against Aidan in September 2004 and was part of the squad that represented the Ivory Coast at the 2006 World Cup in Germany.

His younger brother Arouna Kone also joind him at the National team and went on to feature in alot of games. Arouna was also part of the 2006 FIFA World Cup squad.