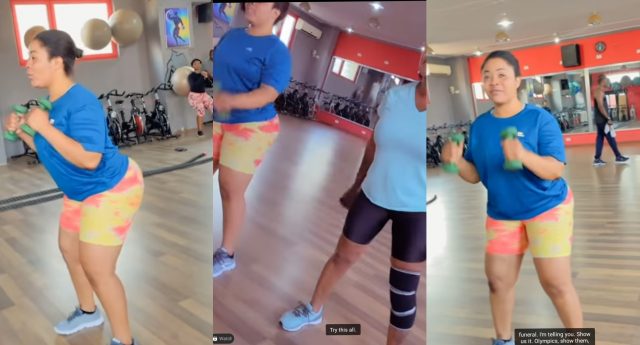 Ghanaian actress, Kisa Gbekle has got netizens talking after seeing a video of her in the gym working out with all heavy assets on display.

The actress who has openly admitted that she has gone under the knife was captured in the gym working out with Afia Schwarzenegger, who she tags as her mom.

The initial video of their time at the gym today was shared by Afia Schwarzenegger who was doing the recording as Kisa could be seen seriously working out. As usual, her followers trooped to her comment section to react to it.

Out of the many comments, the one that caught my attention is the one from one user with the handle chelsea_kels_ who questioned why she is still working out at the gym even after undergoing surgery.

Another fan also noticed her dark elbows that were so visible that it makes it impossible to view the video without noticing it.