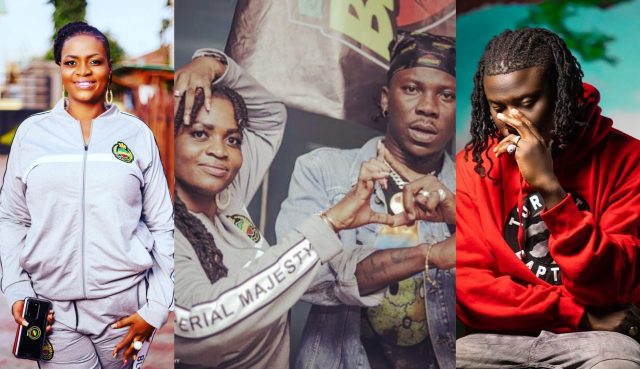 Aisha Modi goes in hard on Stonebwoy in a lengthy post on instagram a day before his Ashaiman to the world concert for denying her in an interview.

As usual, it’s time for the annual “Ashaiman to the World” concert which will be taking place on Saturday, September 3, 2022 in Ashaiman. So as part of Stonebwoy’s media tour to promote the concert, he was on Accra FM for an interview with Nana Romeo.

In the course of the interview, Stonebwoy was asked about his current relationship with Aisha Modi because she still uses the name despite their separation. However, the response given by the Bhimnation president didn’t sit well with Aisha hence her decision to send some strong words to Stonebwoy.

She made a lengthy post on her instagram page directed at Stonebwoy which reads “if I don’t want to explain myself doesn’t mean you can talk anyhow, anywhere ooo masa. The world saw my contribution to your label and brand. Talking as if I was using you for hype.

I was in the game before u came and if u are big, u are not bigger than my ex husband Ofori Amponsah in anyways yea. Stop being ungrateful and be real for once cos the internet never forgets. Everything that happened was recorded on my phone and if I wasn’t that important to your brand, u willnt call back asking me to forgive you for what u said, it’s also record so for peace to rain, lemme just sleep where I’m sleeping.

and if u don’t have anything better to say, don’t talk at all. I was there when u needed me. Never did I take even 1gh from ur brand but rather invested my money, time, wisdom and energy to your brand.

kindly hash pls don’t let us do this biko. I made a vow not to talk or bring out recording of what really happened so pls let respect ourselves. Thank you and this is to whom it may concern.

STOP PISSING ME OFF I BEG. Don’t allow ur ego take you away from urself and this has been your biggest problem in ur career and that will be ur downfall if care is not taken. Gratefulness is the key to greatness and I’m giving you this advise cos I still love u as my own nothing has changed but u really need to learn how to be grateful to people who comes ur way and supports u freely with good heart and mind” she concluded. 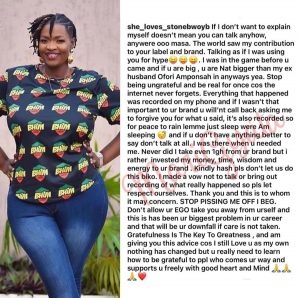 Here is what Stonebwoy said that angered Aisha Modi 👇👇