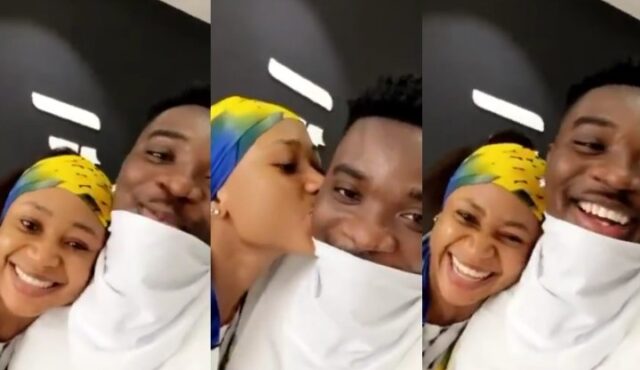 Popular Ghanaian actress Akuapem Poloo might have finally found the love of her life as she flaunts her new boyfriend in a loved up video.

Born Rosemond Brown but is popularly known as Akuapem Poloo in the entertainment industry. She is widely known or perceived as a character who always wants attention hence tries to do things that will get her in the news or trends.

Few months after falling into trouble for exposing her nΔdes to her little boy, it seems she has finally found true love as she happily flaunts him on her instagram page.

Surprisingly, the lucky man is none other than businessman and rapper AMG Armani. From the video she shared, it’s clear they are enjoying each others company as they headed to the gym.

Fans could only hope that it’s not one of her ways to get some more attention.

Apparently, the rapper and business man never believed she could show him off to the public hence had to do it to show how proud she is of him.

The caption reads “He was like I can’t show him off. AMG Armani I’m proud to let the world know we are together. Our first outing to the gym”.