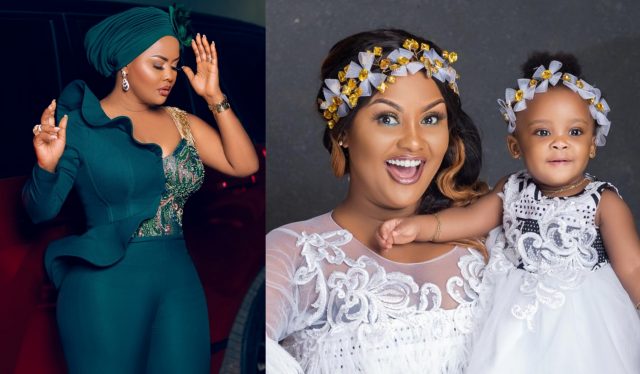 Our very own, Nana Ama McBrown gets emotional as she reveals what she went through to finally get pregnant and gave birth to her beautiful daughter, Baby Maxin in a fresh interview with Naa Ashorkor.

The screen goddess, who is loved by many and hated by maybe just a few apparently went through ‘hell’ just to be able to have the fruit of the womb that has proven to be worth every stress she went through.

Nana Ama McBrown for all her success was only able to give birth in 2019 in her early 40s. However, it wasn’t for the lack of trying as she revealed how long the entire process took before she could finally get pregnant.

She had earlier made some revelations in the past about how she had to do a series of washing of her womb in order to conceive. But in a recent interview with Naa Ashokor on “We Got This Africa” show, the actress made a few more revelations about her struggles.

According to her, she thought her womb was okay until the doctors discovered that she had fibroids which affected her ability to conceive. Hence by the time she went to surgery to remove the fibroids, one of her fallopian tubes was already damaged.

She added she was only able to conceive through In Vitro Fertilization (IVF) which is a process of fertilisation where an egg is combined with sperms in Vitro. A process she said too about 8 months before she got pregnant.