Another fake living from Shatta Wale as he has being busted yet again for posting online money as his.

The CEO of Shatta Empire, Shatta Wale who claims to be the richest musician in Ghana has over the past few days done things that shows clearly he may not be as rich as he claims. Just when the issue of his fake dsquared2 jeans was fading away, he has found himself in another wahala again.

This time around it is money. Just before retiring to bed last night, the dancehall King decided to tease his fans and haters with a suit case full of $100 notes claiming to be his. With a caption that suggests the money is too much for him to count.

Well well well, the internet never lies and our checks have found out that the bag full of money Shatta Wale posted are actually straight from the net.

Take a careful look at the two images below 👇 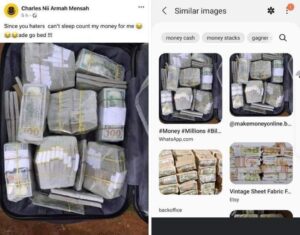 RELATED POST:   Tracey Boakye Gives Son A Treat To Remember In Dubai On His Birthday. [Videos]

Alabi - May 25, 2022 0
Efia Odo who is known to be a very active campaigner for a better Ghana over the past few years has hit back at...