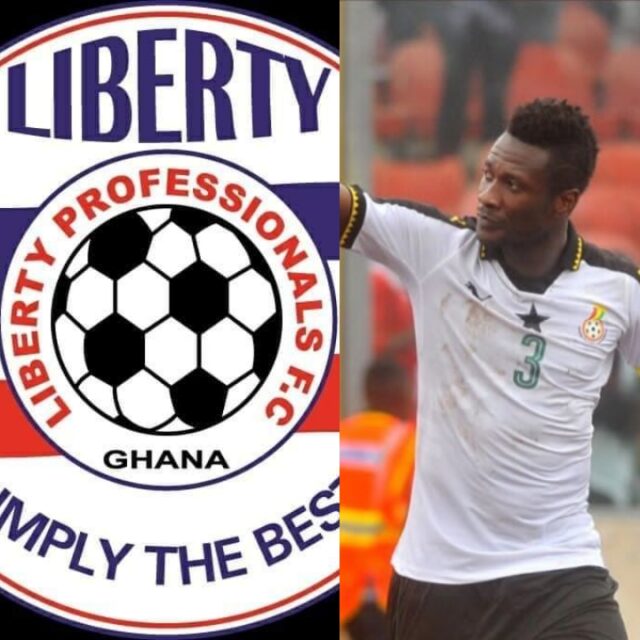 The Ghana Premier league may not be on the same level as that of the western world. However we have been able to produce some top players over the years who have gone on to represent the national team. Most of whom through the exposure of the National team were able to ply their trade abroad. This article takes a quick look at 5 popular players produced by Liberty Professionals.

Now for those who may not know much about Liberty Professionals, it is a Ghana Premier League Club located in Dansoman, Accra. The club was founded in 1996 and their home stadium is the Carl Reindorf Park with a sitting capacity of about 2,000 people.

The first name that quickly comes to mind is Asamoah Gyan the baby jet. Who would have thought that a player produced by Liberty Professionals from Dansoman will go on to become such a great player. But today, he is considered to be one of the legends of the game. Gyan began his career in 2003 with Liberty Professionals scoring ten goals in sixteen matches.

Asamoah Gyan is one Of Ghana’s favorite footballers and is the top scorer for the Ghana National team. He now plies his trade here in Ghana at Legon cities.

Another top Blackstars player to be produced by liberty professionals is Sulley Muntari.

Sulley Muntari’s abilities first came to light in youth tournaments, while he was playing for Liberty Professionals youth team. Since then, he has spent most of his career playing in Italy key amongst them is Inter Milan and AC Milan.

RELATED POST:   Arsenal Man, Thomas Partey Enstooled As Chief In His Hometown; Gets A Title (Details)

Former Blackstars and Chelsea midfielder is another great talent that was produced by Liberty professionals. He started his career playing for the clubs youth team  in the 1998/1999.

Former Blackstars defender John Painstil was also produced by liberty professionals and has since gone on to feature in over 100 games for the national team. He is currently an assistant manager at Kaiser Chiefs in the premier soccer league.

Baffour Gyan is the elder brother of Asamoah Gyan hence it is not surprising that he once played for Liberty Professionals. He then went on to spend about 12 years playing in Europe before returning to his homeland.