Self acclaimed children president, Yaw Boateng popularly known as Funny Face in police custody for threatening certain individuals through social media. News of his arrest was made public via the official facebook page of Ghana Police.

The communique reads; Funny Face in Police Custody for Allegedly Threatening Some Individuals.

Due to the history of the suspect, the police shall submit Benson Nana Yaw Oduro Boateng to the court for an order for psychiatric examination, to determine the next line of investigative action.

The police is committed to protecting lives with the generous help of the public.

We want to assure the public that we shall not take anything for granted in the interest of public safety. 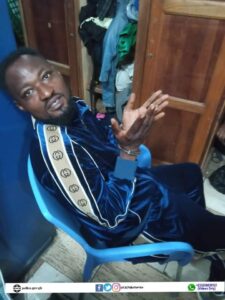 You may recall that the comedian whiles going through his recent depression took to his instagram page to pour out his frustrations.

Within the space of barely seven days, he had attacked the likes of Fadda Dickson, Bola Ray, Adebayor, Lil Win, Kalybos, Bismark the joke etc.

The list is so long one cannot tell for now who actually reported him to the police or whether the police is acting based on their own intelligence.