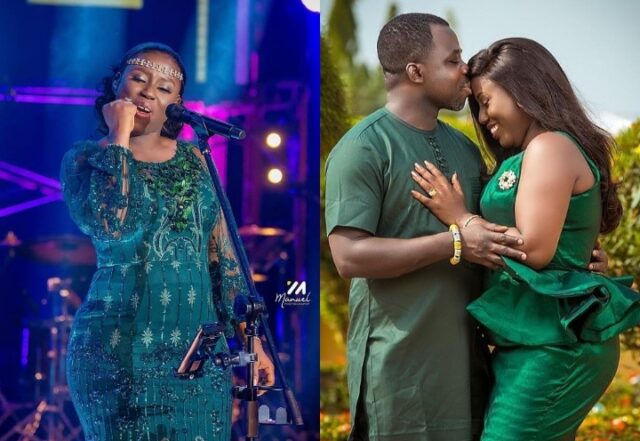 Multiple award winner at the 2021 edition of the Vodafone Ghana Music Awards is a household name in Ghana but how well do you think you know her?

Well, we bring you all you need to know about the Adom Hitmaker and history maker. She became the first ever female gospel artiste to win the Artiste of the year award and just the second gospel artiste to ever win the prestigious award.

Diana Hamilton was born to Apostle Felix Elvis Antwi and Confort Antwi. She is a daughter of an Apostle hence finding herself in ministry isn’t quite a surprise. She is the third of eight children.

Diana Hamilton hails from the Kumasi in the Ashanti region.

She had her basic education at Morning Star school at Cantonment and then continued to Ghana National College for her secondary education. From there, she enrolled as a nursing student which she successfully graduated and got her license to practice.

Diana Hamilton is married to Dr. Joseph Hamilton and are blessed with two adorable kids ie. Michael and Michaela.

For the church that she is, Diana Hamilton started her music career at a very young age. However, she shot into the limelight in 2007 with her debut album titled Ɔsoro bɛkasa. She then released another album in 2010 titled Ɛnsi wo yie.

She is currently a brand ambassador for Enterprise Life Insurance.

The gospel musician is not new to awards as she has received several nominations and won some notable ones as well.

Diana Hamilton won the ultimate award at the 22nd edition of the Vodafone Ghana Music Awards ie. Artiste Of The Year beating off competition from the likes of Kidi, Medikal, Kuami Eugene etc. She received about six nominations at the 2021 VGMA’s but managed to win four ie. Best Gospel Song of The year, Best Gospel Artiste of the Year, Vodafone most popular song of the year and Artiste of the year.

She also won the gospel artiste of the year at the 2020 edition of the Vodafone Ghana Music Awards.