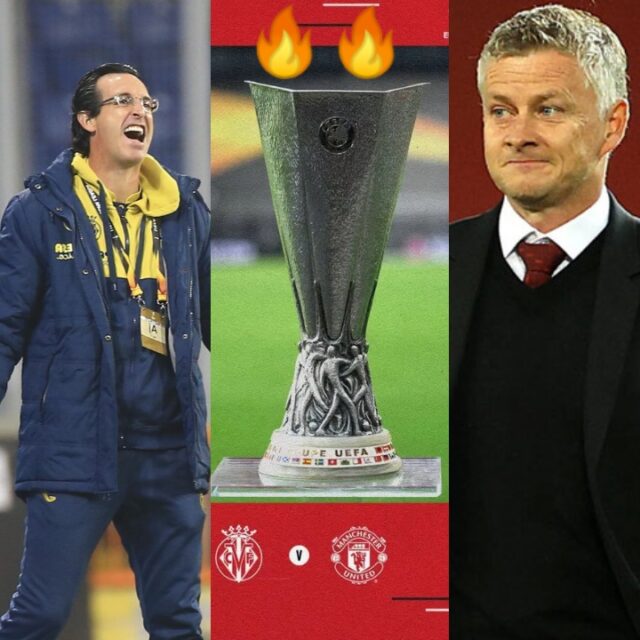 The battle for who wins the Europa League Trophy Is tonight and the masses will be supporting Villarreal for diverse reasons.

In this piece, we will be looking at a few reasons why the masses will be supporting Villarreal led by Arsenal’s former coach, Unai Emery. The 2020/21 Europa League Final will take place in Poland at the city of Gdnask between Villarreal and Manchester United.

It is about making history for Villarreal as this is the first time of making the finals. However for Manchester United, they will be looking to make it two after winning it with Jose Mourinho in 2017.

Manchester United’s Road To Gdnask
The English side finished third from their Champions League Group United which constituted PSG, RB Leipzig and Istanbul hence dropping to the Europa league.

Villarreal was in the group stage of the competition with the likes of Maccabi Tel Aviv, Sivasspor, Qarabag which they topped the group with 13 points.

They managed to beat Red bull Salzburg with a 4:1 win aggregate in the 1/16 to meet Dynamo Kyiv. They also beat Kyiv 4:0 on aggregate to qualify for the 1/4.

At the 1/4 stage they met Dinamo Zagreb and beat them with an aggregate of 3:1 to qualify for the semi finals. They then met Unai Emery’s former club, Arsenal in a cagey and difficult encounter but managed to to qualify over them to set up an encounter with Manchester United in the final.

Why The Masses Will Be Supporting Villarreal

1. Noisy Fan base: Manchester United is tagged as one of the clubs with a noisy fan base who brag alot about their achievements. For this reason, fans from clubs such as Liverpool, Chelsea, Arsenal and the likes wouldn’t want to see United win the Europa league trophy to rub it in their faces. For peace to reign, many would wish Manchester United do not win the trophy tonight.

Chelsea may argue that they are in a Champions League final. However, as at today they are all Trophyless in the 2020/2021 season hence will not be happy to see Manchester United win the trophy.

Former Arsenal coach, Unai Emery deserves a statue should he win the Europa league tonight against Manchester United. And this is something alot of neutrals all around the world will want to see. The man knows how to win the Europa league as he has won it 3 times in the past and will be looking forward to making it four(4).