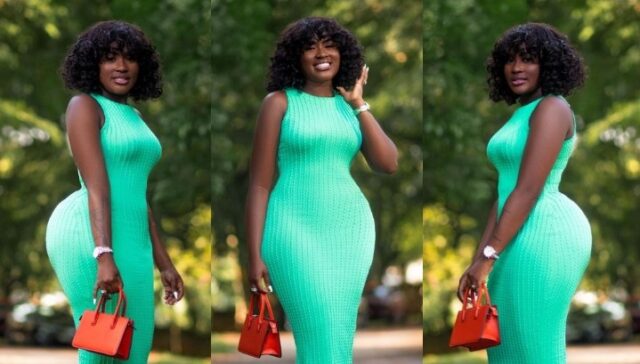 Fella Makafui subtly addresses the issue of an alleged misunderstanding in their marriage as she happily flaunts her wedding ring and the tattoo she had with Medikal to prove haters wrong.

There were rumours of an ongoing fight between celebrity couple, Fella Makafui and Medikal although not much was known about it.

It was alleged that the two were fighting low key but didn’t want the public to know about it. The rumours looked like they were true on Fella Makafui’s birthday a week ago.

Medikal did not take Fella Makafui out to chill like he was treated on his birthday earlier this year.

READ ALSO: Abena Korkor Admires Herself As She Fails To Choose Her Favorite Pic. [Watch Slides]

Neither did Medikal post his beautiful wife early enough on her birthday like many thought he should do.

However he did post her later in the day describing her as the best wife, best mother, best dancer, among other things.

READ ALSO: Maame Serwaa Reveals What She Wants From A Man. [Screenshot]

She did so by flaunting her wedding ring and the matching tattoo she had with her husband to show that she is still very much committed to her marriage.

SWIPE LEFT TO VIEW ALL SLIDES 👇