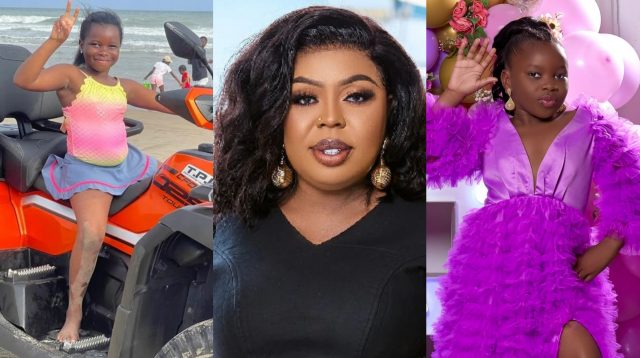 The thing about talking bad about Afia Schwarzenegger is like touching the tail of a lion. Once you do that, you should be ready for the fireworks and that is exactly what she has done again today.

Apparently, there are a few rumors going on around town that she has sent Pena Geiling E. Amankona, her adopted daughter to her biological parents. A falsehood which the comedienne did not take lightly as she curses all those spreading such rumours.

It was actually a fan who drew her attention to it after she shared a video of Pena riding a quad bike at the beach.

The fan with the handle florencejon2 said “some of dis bloggers can lie ooo..  We heard uve send penalistic Pena ma love back to her parents.. Am happy she is still wif u God bless ur hustling.

Reacting to what the fan said, Afia Schwarzenegger simpy went in hard on those spreading such rumours by cursing them in the process. She said “I am her only parent. God punish their mothers”.

This clearly shows that Pena is still with her as she confirms being the only parent of her daughter and a proud one for that matter.

Check out a screenshot of what she said below