According to controversial artiste manager Mr. Logic, gospel musicians should not be included in the artiste of the year category at the Vodafone Ghana Music Awards.

Since the winner was announced late Saturday night, there has been talks about whether or not Diana Hamilton indeed deserves the award.

Speaking on DaybreakHitz on HitzFM, Mr. Logic is of the opinion that Gospel artistes should be limited to awards like Gospel Song of the Year and Gospel Artiste of the Year. He believes the Artiste of the year award is for commercial purposes and not suited for gospel musicians. 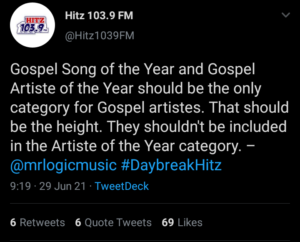 How many times will people selling religion be given commercial TROPHIES ? Oh Ghana when.

Can we start looking into giving antoa,kwaku bonsam and some Islamic Singers Equal rights ?

I think it will be fair “

Meanwhile, blogger Ameyaw Debrah is also of the view that the entire category must be scrapped off to save ourselves from this debate. He made comparisons to the Grammy’s as there is nothing like artiste of the year like we have here in Ghana.