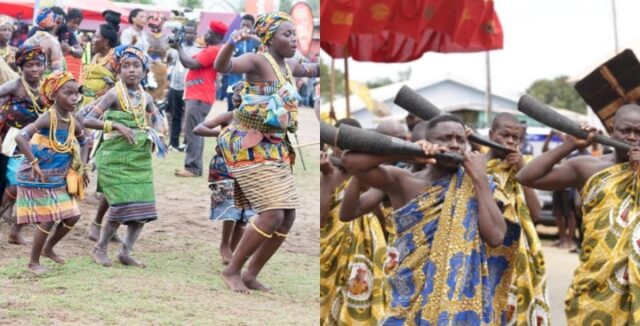 Ghana has several festivals celebrated by the various tribes for various reasons and at different times of the year. And one of such festivals is the popular Hogbetsotso festival which is a big festival in Ghana.

The festival is celebrated by chiefs and people of Anlo in the Volta region of Ghana. For a better understanding, these are the main towns that make up Anlo; Keta, Dzita, Anloga, Anyako, Kedzi, Afiadenyigba, Alakple, Tito, Whuti, etc.

When Is It Celebrated

The Hogbetsotso Festival is celebrated yearly in November specifically on the first Saturday of the month.

Where Are The Celebrations Held?

Hogbetsotso is held at the capital of the Anlo state which is Anloga.

Why It Is Celebrated

The festival is celebrated to mark their escape from King Togbe Agorkoli, who was believed to be a wicked ruler at the time. They got the name (Hogbetsotso) which means “the festival of exodus” in the Ewe Language.

According to history, the Anlo’s migrated from South Sudan to Notsie in Togo and then to their present day land. So it was in Notsie where they had to escape from a wicked king at the time called Togbe Agorkoli.

To make their escape possible, the women had to deliberately pour all their waste water on a particular portion of the mud wall that was around the town. The wall gradually became soft allowing them to create a hole in it and that was how they escaped from Togbe Agorkoli.

It is also believed that they had to walk backwards in order for it to make it look like they were rather going into the town and not leaving instead. And this is how the “Agbadza” dance came about.

How It Is Celebrated

The festival is not a one day event as several activities are held in the run up to the grand Durba it self. It offers them the opportunity to resolve conflicts or misunderstandings between families or people and to promote togetherness.

Ceremonial stools are also deliberately purified by pouring libations because they believe that is where their ancestors dwell. After the purification ceremony is massive general cleaning of the villages from the Volta River and ends at the Mono River in Togo.

The icing on the cake is the grand Durbar of the chiefs and the people of Anlo. It is a colourful durbar like non other as the chiefs dress nicely in their Kente whiles their subjects pay homage to them amidst singing, drumming and dancing.

The main dance for the day is the “Agbadza” dance. It is a thing of beauty that requires the use of some technique to perfectly execute. However, when you watch how the natives and those who have mastered this art dance, you would think it is that simple.

Agbadza is a popular ewe dance that can be performed at all kinds of events such as funerals, naming ceremonies, weddings etc. Although it is an Ewe dance, it can be performed by persons from other tribes as well.

Hogbetsotso Festival is indeed one of the biggest festivals in Ghana is not surprising that it is often attended by some notable persons in the country such as John Dramani Mahama and the Late JJ Rawlings in 2019.