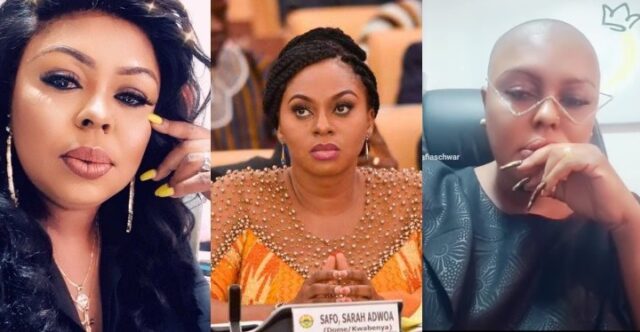 Popular Ghanaian media personality and queen of Ghana comedy, Afia Schwarzenegger has revealed how she abandoned her sick father and children to campaign for Adwoa Safo in the Dome Kwabenya Constituency.

The current ongoing brouhaha surrounding the Gender Minister, Hon. Adwoa Safo doesn’t look like its ending now as many have called for her resignation and a by-election be held in her constituency.

A few days ago, the baby daddy of Adwoa Safo, Hon. Kennedy Agyapong made some shocking revelations about the whole situation.

So it was after that revelation that Afia Schwarzenegger took excepts of his interview and posted it on her instagram page to express her regret in campaigning for her at the last general elections.

According to Afia Schwarzenegger, she abandoned her sick father and children to campaign for Adwoa Safo in the Dome Kwabenya parliamentary elections. However, she now regrets her actions and asks for a by-election in the constituency because she considers the seat vacant.

She also asked for forgiveness from the people of Dome Kwabenya for campaigning for the Gender Minister.