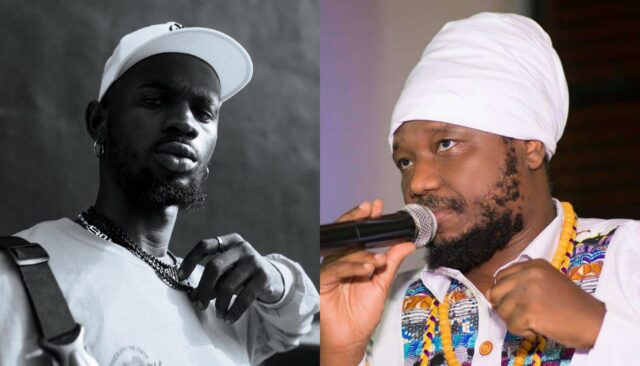 Black Sherif has hit back hard at Reggae musician Blakk Rasta for suggesting that his current success in music is as a result of luck and not because his Songs are better.

Blakk Rasta was on the Upside Down show on Citi TV a week ago and it was on this very show that he suggested that there are actually better songs being released by other artists in Ghana. However, he believes Black Sherif is the one enjoying all the buzz because of luck and not because his Songs are better.

Black Sherif, who currently has a couple of massive hit Songs with the latest being ‘Kweku The Traveller’ which was released in late March and just about a week or two later became the most Shazamed song world wide. It topped other charts as well including number 1 on the following; Boomplay Hot Trending, Thriller, and Deezer, #5 in the UK, #1 in Sweden etc.

Are all these due to luck or hard work? Well the singer believes it’s the later!! He finds it unfortunate for Blakk Rasta to think otherwise. He however stated that he believes in luck and Grace but then he really worked hard as well to get to this level.

From his speech, it’s clear he wasn’t happy with what Blakk Rasta had said.

Watch a snippet of the interview he granted on The Upside Down show on Citi TV on Sunday May 22,2022 below 👇👇