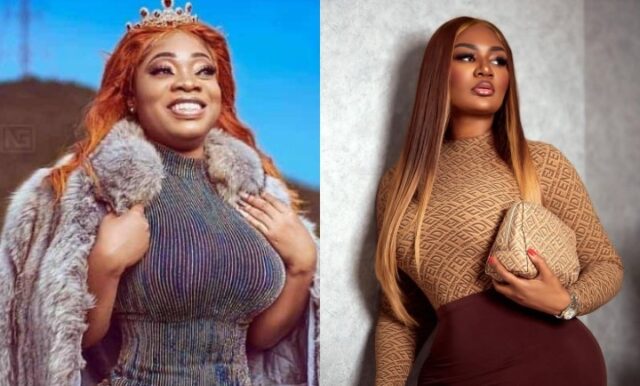 Popular Ghanaian actress and instagram influencer, Moesha Buduong has sort of confirmed she used to wear fake designers as she openly tells Sandra Ankobiah that she knows she laughed at her in the past.

Moesha Buduong who until she gave her life to Christ not long ago was well known for living an extravagant lifestyle whiles flaunting her body as well. However, it appears most of her ‘designer clothes’ were fake after all.

In an apology to Sandra Ankobiah, Moesha sort of confirmed that she wore fake designers in the past and knew that Sandra used to laugh at her behind her back.

She made this commens in the comment section of Sandra which read in part “… everyone talks about everyone in our industry, and I know you’ve also spoken about me and laughed at my fake designers and I know you love me because God brought you into my life…..”

So the question on the lips of many is that, does this then confirm the notion that most of these celebrities or slayqueens are fully aware they are living a fake life but still do it regardless? Why did she continue to wear the fake designers even though she knew they were fake? Is it for social media attention?

Well, make of it what you will.