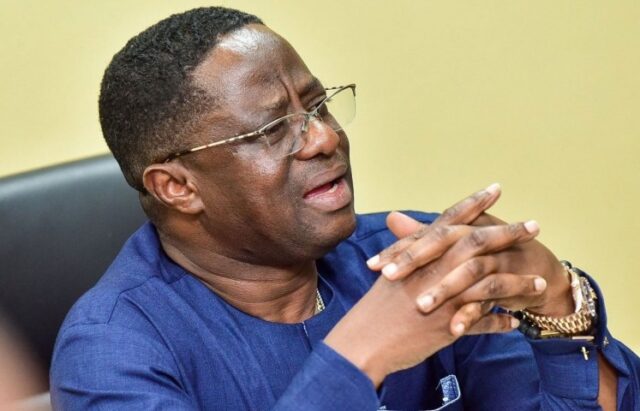 You are at the right place if you wish to have an in depth information about the current NPP MP for Hohoe and the Minister for Railways Development.

This article is solely about John Peter Amewu biography. He set a record in the last elections to be the first NPP candidate to win the parliamentary elections in Hohoe.

It was hugely possible due to how hard he worked at his previous ministries ie. Lands and natural resources and then at the Energy ministry.

Read along as we look at John Peter Amewu biography; his age, education, family, career etc.

Born John Peter Amewu in 1962 in Wli-Todzi in the Hohoe Municipality.

Peter Amewu is 59 years old at the time of writing this article.

He obtained his bachelor’s degree at Kwame Nkrumah University of Science and Technology and continued to the University of Ghana, Legon for his MBA in Finance.

John Peter Amewu went ahead to University of Dundee (UK) for a Master’s degree in Petroleum law and policy.

John Peter Amewu is married and is blessed with four children

John Peter Amewu is a co-founder of Africa Centre for Energy Policy (ACEP).

He worked as the director of policy and research where he provided pro-active and comprehensive policy related advice.

John Peter Amewu moved through the ranks before becoming the cabinet minster and then the MP for Hohoe Constituency.

He served as the Municipal Chief Executive (MCE) under the John Agyekum Kufuor administration from 2005 to 2009.

READ ALSO: How To Transfer Airtime From Vodafone To Vodafone In Ghana

John Peter Amewu had contested and lost the Hohoe constituency seat twice to the NDC candidates. He wasn’t to be denied in the 2020 elections though as he become the first NPP candidate to win the seat.

He was appointed by Nana Addo Dankwa Akuffo Addo in May 2017 as a cabinet minster for Lands and Natural resources. Peter Amewu was later moved to the Energy Ministry to replace Boakye Agyarko in 2018.

President Nana Addo Dankwa Akuffo Addo moved him again in his second term of office to the Ministry of Railways Development.