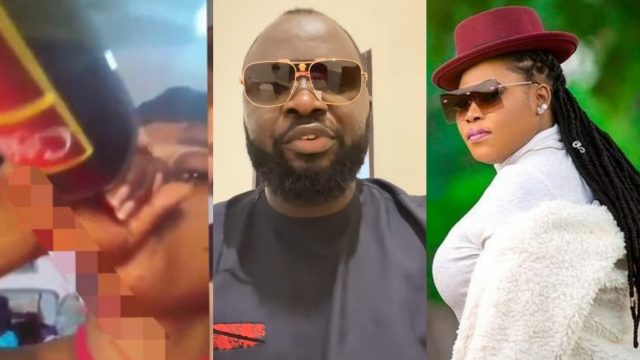 More troubles for the embattled Gospel musician as her husband has come out to speak on the video of a drunk Joyce Blessing that is circulating online and the subsequent statement made by her management.

Ghanaian Gospel musician, Joyce Blessing is making airwaves hugely due to her beef with Nana Agradaa who supposedly is the one behind the leak.

After the video of the drunk Joyce Blessing hit the Internet yesterday, her management subsequently issued a statement earlier today denying the video saying it was an old video she sent to her husband at a time things were not going on well in their marriage.

However, her husband has finally reacted to the statement exposing hef wife in the process. He uses the name Dave Joy on instagram where he posted the video. However he says he is called Kwabena Adu Gyamfi and not Kwame as you can clearly hear in the video of her drunk wife.

According to him, the video cannot be said to have been sent to him so she should be honest and mention who the video was really meant for. He added that, they are still legally married and that he will add the statement issued by her management in his case at the court.

Meanwhile, the husband of Celestine Donkor has asked Ghanaians to be measured in the way thy bash the singer saying she is only a divorcee and not a murderer.

His statement read “Whoever is doing this to Joyce Blessing should know that she is just a divorcee and not a murderer. Is she the only person to have been divorced in life?She is sipping wine and so? Since when did drinking wine become a crime?

By the way, what is the first miracle Jesus did? (Read John 2). I am not here to teach the theology of wine. Nobody has the right to condemn anyone.

Enough is enough! Leave the woman alone! Be sensitive to her children at least.

To my colleagues in the gospel fraternity, today it is Joyce and we have all gone mute, tomorrow it could be you. Let’s fight for our sister.

Joyce be strong. The Lord is your strength. He will fight for you. Just be still.”