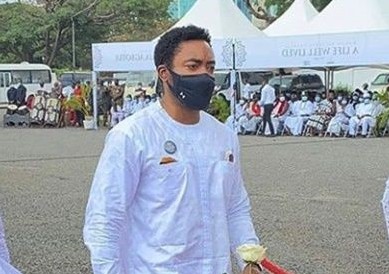 This article gives you a comprehensive Kimathi Rawlings biography so you get to know everything that there is to be known about the fine gentleman.

Kimathi Rawlings is the only known son of the late former President Jerry John Rawlings. He never made any public appearance whiles his father was alive hence Ghanaians did not know him. However, he quickly became the talk of town at his late dads vigil and funeral service due to how handsome he is and his foreign accent.

Read Along For The Full Kimathi Rawlings Biography

Kimathi Rawlings was named after a Kenyan freedom fighter called Dedan Kimathi who fought tireless for the rights of his people.

His actual date of birth is not known however, he should be born in the late 1980s. He is the last born of his parents born after his three sisters.

Kimathi Rawlings began his basic education at Morning Star School and then North Ridge Lyceum in Accra-Ghana. He then proceeded to Millfield School in the UK for his secondary education.

From there, he continued to Aston University in Birmingham, England where he graduated with BSc in International Business.

Kimathi Rawlings is a licensed and certified by MDT International in Negotiation skills for the Oil and Gas industry in 2012 and introduction to Oil and Gas Production in 2013.

He is experienced commercial advisor and negotiator working in the oil and gas industry for some time now. He worked as an International Negotiator at Eni, an Oil and Gas conglomerate in Italy.

Until his father’s demise, he was living in London in the United Kingdom but came down to Ghana for the funeral rites. He has since returned to the UK.

Kimathi Rawlings has kept his personal life very secret and away from the public. As a result, it is not clear if he got married in the United Kingdom or not.

Kimathi’s actual Networth is not yet known. However, we will update this article as and when such information is available to us.