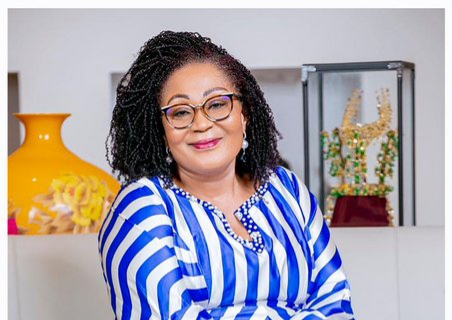 Lordina Mahama is a former Ghanaian First Lady between 2012 and 2017and a former Second Lady between 2009 and 2012. She is the wife of former President John Dramani Mahama.

She was born Lordina Effah to Mr. and Mrs. Effah but she is popularly known as Lordina Mahama.

Lordina hails from Jema-Ampoma in the Nkoranza District in the Brong Ahafo region of Ghana.

She started schooling at Tishigu Anglican elementary school. She obtained her GCE education from Ghana Secondary School in Tamale where she met her husband John Dramani Mahama.

Lordina Mahama holds a degree in Hospitality Management at Ghana Institute of Management and Public Administration (GIMPA). She also holds a Master of Arts in Governance and Leadership at the same University and graduated in 2012.

She obtained a Master of Laws (LLM) in Business Law/International Business Law from the De Montfort University in the United Kingdom in 2019.

Lordina is a trained caterer and a Hospitality manager before becoming a Second Lady and subsequently a first lady. She was a supportive wife and played her roles as Second and First Lady excellently.

As a first lady, she was an HIV/AIDs advocate, Breast and Cervical cancer advocate. She also empowered women through her foundation and Technical and Vocational Training (TVET). She became President of the Organisation of African First Ladies Against HIV and Aids in 2015.

As part of her women empowerment agenda, she started the Gambaga Training Centre to provide vocational training and other entrepreurial skills to women and girls in and around the camp.

She has also made donations to artisans across the country who had completed TVET to help them in transitioning into the job market.

Lordina is the founder of “The Lordina Foundation”. The foundation has touched the lives of beneficiaries in different regions of Ghana.

Some notable honours the former first lady has recieved include;

She got married to former President John Dramani Mahama in 1992 and are blessed with five children. They are Shafik, Shahid, Sharaf, Jesse and Farida Mahama.