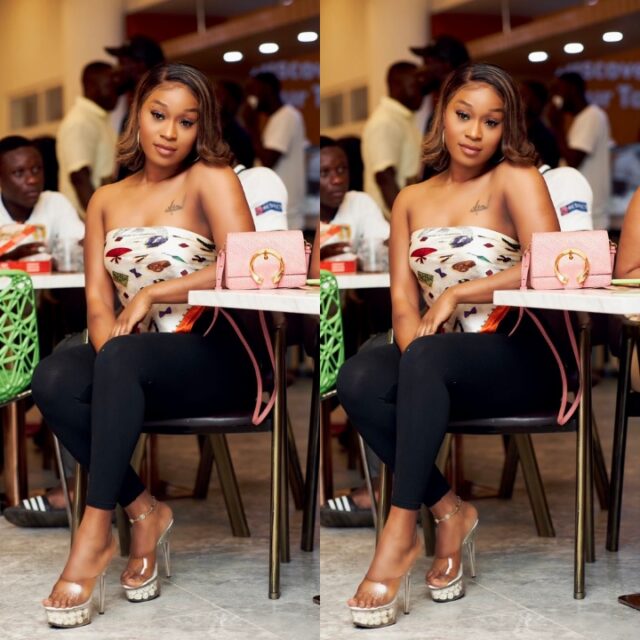 Victoria Lebene seems to have awoken a sleeping lion being Efia Odo as she goes all out to reveal how much men are willing to pay her for sex.

Victoria Lebene who is the wife of blogger Nkonkonsa had suggested earlier in the week that activists of the FixTheCountryCampaign must fix themselves first by dressing decently.

These statements appears to be a jab at Efia Odo who is a strong FixTheCountry Campaigner and her love for wearing revealing clothes. Efia Odo upon seeing what Victoria Lebene posted decided to let the cat out of the bag as she labeled her as a pimp before getting married.

According to Efia Odo, Victoria once tried to hook her up with a man willing to pay $2k but she declined because she doesn’t do hook ups.

Lol you’re married now so you think your decent? Lmaooo you forgot when you tried to “hook” me up and I told you I don’t do hook ups? Talking bout he will give me $2k 😂😂😂. Bitch you was selling pussy and tried to make me sell mine but now you’re married so you’re decent😂

She later revealed how much some men are willing to pay her just to chop her but rejects them because her pu$$y is not for sale.

Sometimes $5k- $10k I’ve declined all cuz I don’t sell pussy. No shade to those who do. It’s just not my thing https://t.co/psbc1QfBuv

According to her, she will never sell her pu$$y no matter how broke she is.

For a very long time, some netizens believe she is into hookups or sells her body for money. However, with these latest development, we hope Ghanaians begin to see her as she is not look at her way of dressing to judge her.