The Ghana police service has arrested the chief of Sefwi Elubo and his brother whiles 6 others are on the run in connection with galamsay.

Ghana, and for that matter government seems to be losing the fight against galamsay as the canker lingers on. However, since the arrest of Aisha Huang about a week ago, there seems to be a revived awareness around the issue which many hope will bring about positive results.

READ ALSO: I Prayed For Him To Be Big But Never Came Back To Say Thank You – Nigel Gaisie Reveals Secret About Fameye On His Birthday

In a latest development, the Ghana police service has issued a statement about the arrest of the Sefwi Elubo chief and his brother who are suspected to be involved in galamsay activities in the district.

According to the press release, the arrest of the Chief of Sefwi Elubo, Nana Anini Baffour and his brother Kwadwo Affi were arrested following investigation of a video circulating on social media showing illegal mining activities in some compound houses of the town. 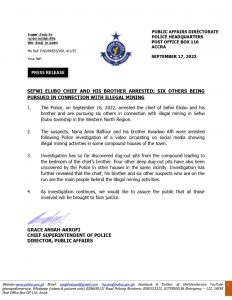 SEFWI ELLUBO CHIEF AND HIS BROTHER ARRESTED; SIX OTHERS BEING PURSUED IN CONNECTION WITH ILLEGAL MINING pic.twitter.com/nm7xE7FHXB