Prophet Nigel Gaisie has revealed why white preachers seem to live longer than black preachers, bringing out some interesting reactions from his followers on facebook.

The founder and head pastor of Prophetic Hill Chapel, Prophet Nigel Gaisie has revealed through a facebook post why white preachers allegedly live longer than black preachers. The man of God is known for his Prophetic abilities although his prophecies may seem controversial at times.

In a post on his official facebook page last night June 7, Prophet Nigel Gaisie revealed why white preachers generally live longer than black preachers. According to the Prophet, “Their people don’t attack them like our very own do to us*** The blacks are called names, are hated for nothing, divisions among our ranks just to mention a few” O Black Man- He lamented. 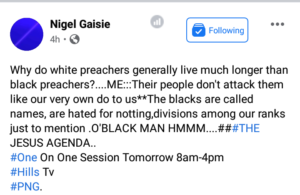 Considering the amount of backlash he has received in the past and the recent death of Prophet TB Joshua, it is not surprising that such words are coming from the man of God.