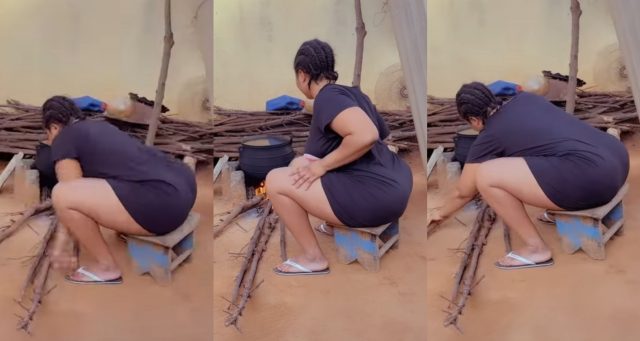 Beautiful ghanaian actress, Kisa Gbekle has given her followers a taste of village life as she proudly shares a video of her in the village sitting pretty on a kitchen stool as she warms water to bath.

Kisa Gbekle as usual has got many drooling over her big nyansh as she displays it once again but this time around in the village. The actress apparently is in the village in Aflao called Gbubla to visit her mom.

However, life in the village had to force her to drop her ‘slay queen’ life and go down to the level of her current surrounding. So in the video she posted, the beautiful and curvy actress is seen sitting in a tempting position on a kitchen stool as she tries to arrange the firewood under the water she was warming for herself and mother.

But as usual, it is her back side that has caught the attention of onlookers as they can’t stop salivating over her big tundra.