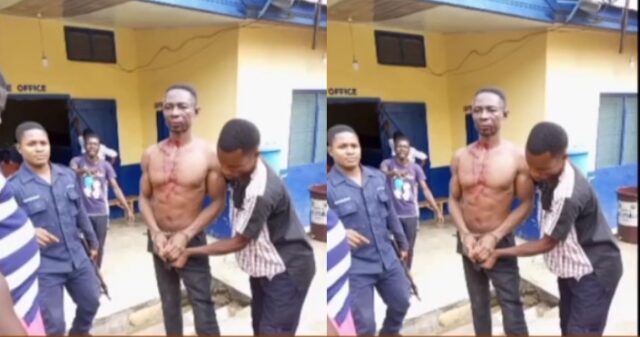 A rather sad and unfortunate news coming in from Afigya Kwabre South in the Ashanti region as one man is reported to have killed his friend for ch0pping his baby mama in his dream.

The incident was reported by United Television earlier today by their correspondent in the area who narrated how the whole incident took place.

According to the reporter, Kwadwo Adusei is the man in police custody at the moment who is alleged to have killed his friend for sleeping with his baby mama in his dream.

He is believed to have killed his friend because he feared the dream might come to pass if he doesn’t end his life. Kwadwo Adusei later killed his 86 years old grandfather for spiritually taking his manhood away and giving it to another man.

He then went to one Kwame Kwakye and killed him as well because he believes he is the one who owns his manhood now.

Interestingly, Kwadwo Adusei already has 8 children with different women hence it is surprising why he believes his grandfather may have taken his manhood away.

He is currently in police custody and we will do well to bring you any information as the story unfolds.