Sandra Safo Ababio has finally replied the ex-wife of Kumawood comic actor, Kwadwo Nkansah Lil Win who accused her for being the reason behind their failed marriage.

After news of Lil Win’s marriage to his baby mama Maame Serwaa broke, his ex-wife has been speaking and revealed in an interview on Ohenaba media that Sandra was the cause of their failed union. She alleged that she once saw raw photos of Sandra Ababio on Lil Win’s phone when she was living with the actor.

However, Lil Win has since apologised to the actress for all the rumors that is been spread all over the place and gave reasons why he left his ex-wife.

Sandra also chose to reply the ex-wife of Lil Win after all the allegations leveled against her. But rather chose to reply her in a cryptic manner without really mentioning her name.

She used her official Instagram page to reply Patricia in a form of a caption that accompanied her post. The caption read in part “…. every single person on the planet as a story. Don’t judge people before you truly know them, or knowing the truth!! “ 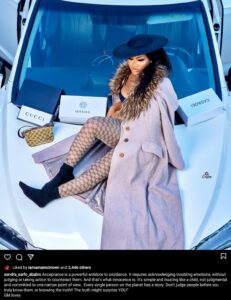 “Acceptance is a powerful antidote to avoidance. It requires acknowledging troubling emotions, without judging or taking action to counteract them. And that’s what innocence is. It’s simple and trusting like a child, not judgemental and committed to one narrow point of view…every single person on the planet as a story. Don’t judge people before you truly know them, or knowing the truth!! The truth might surprise you!!