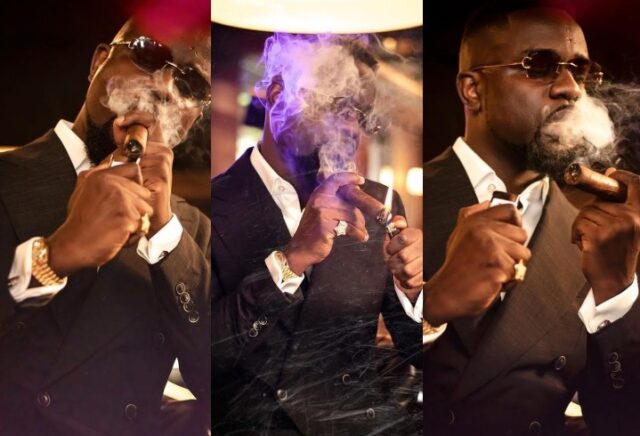 “Successful” Sarkodie has finally opened up on his recent smoking of cigars that has attracted criticisms from some section of ghanaians.

Ghana’s most decorated rapper, Sarkodie has finally opened up on his recent smoking of cigars whiles on a nationwide media tour earlier today on HitzFM.

READ ALSO: Sarkodie Explains What His Current Relationship With Stonebwoy Is Like

Sarkodie has recently developed the habit of posing for pictures whiles smoking cigars. Such an act has attracted criticisms from some section of ghanaians. And he has finally clarified the reason behind the cigars.

The rapper has alot of influence on the youth hence it is understandable for people to criticize him.

However, it appears he genuinely has a reason for the cigars and doesn’t intend to stop because someone says so.

READ ALSO: Kidi Finally Explains Why He Lost Artiste Of The Year Award At The VGMA’s.

According to him, “Smoking generally is bad. However, if you do a little research on Cigars, you’d learn it is used to celebrate success; Achievement. It is a sign of victory. I do not always get up and smoke cigars. the only time I hold cigars is what you see in the pictures”.

If what he says are to be believed then it’s quite understandable.

He is successful at what he does and has achieved alot in the Music Industry and with the message behind his latest album, it’s clear he was trying to send out a message with the cigars.