The husband of Gospel musician, Celestial Donkor known as Kofi Donkor has come to the defence of the embattled Joyc Blessing saying she is a divorcee and not a murderer hence Ghanaians should be measured in their criticisms.

The ‘Unbreakable’ hit maker has been on the chopping board lately after a video of her drunk and confessing love to someone who has been identified as her exhusband. As usual the kibitzers are judging for this act because they felt she shouldn’t be drinking alcohol as  Gospel musician.

However in the midst of all this bashing, the husband of colleague singer, Celestine Donkor has come to the defense of Joyce Blessing asking that Ghanaians should let her be and that she is only a divorcee and not a murderer.

He made these comments earlier today in a facebook post that reads “Whoever is doing this to Joyce Blessing should know that she is just a divorcee and not a murderer. Is she the only person to have been divorced in life?She is sipping wine and so? Since when did drinking wine become a crime?

By the way, what is the first miracle Jesus did? (Read John 2). I am not here to teach the theology of wine. Nobody has the right to condemn anyone.

Enough is enough! Leave the woman alone! Be sensitive to her children at least.
To my colleagues in the gospel fraternity, today it is Joyce and we have all gone mute, tomorrow it could be you. Let’s fight for our sister. Joyce be strong.

The Lord is your strength. He will fight for you. Just be still.” He concluded. 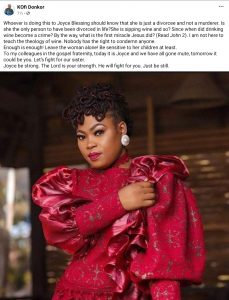 Meanwhile, the singers management has come out to issue some clarification about the said video which is making rounds on the Internet. They claim the video is an old tape she sent to her exhusband at a time when their marriage was failing hence are not sure who may have leaked the video.