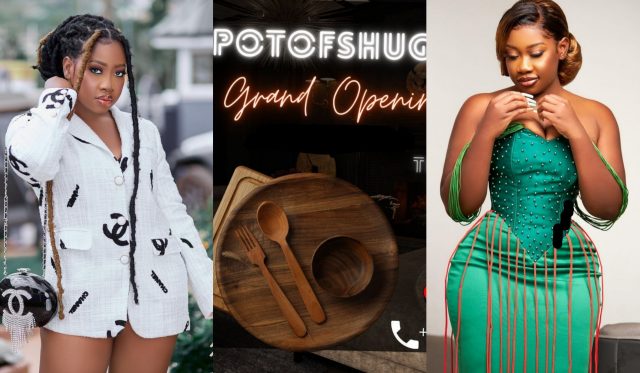 Popular ghanaian model, social media influencer and video vixen, Shugatiti is set to officially open her restaurant in the coming days getting fans excited after hearing the news.

The actress and video vixen has been criticised alot by Ghanaians due to her constant habit of flaunting her body on social media for all to see. An act she says she doesn’t mind if her kids get to see such pictures of her in future.

However, this recent move by her has got many applauding her for investing the money she makes from promoting her stuff into a real business such as a restaurant. It is not clear if it was funded by her boyfriend or herself considering the fact that she mentioned some time back that the house she lives in was financed by her mystery boyfriend.

Her restaurant, which will be officially opened over the weekend on Saturday, 6th August 2022 is located in Osu in Accra and it is called “Pot of Shuga”