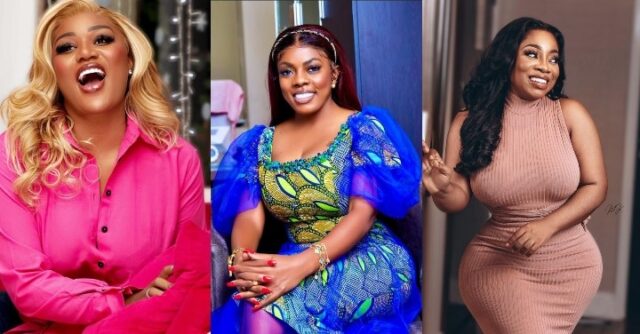 Ace broadcast journalist, Nana Aba Anamoah has come to the rescue of her friend, Sandra Ankobiah as she sends a strong warning to Moesha Buduong following her recent comments.

Over the weekend, the repented Moesha Buduong showed up in the comment section of Sandra Ankobiah to apologize for some comments she made about the celebrity lawyer. However, one interesting line in the apology was when she said they both dated men for money.

Although Sandra herself didn’t comment on it at the time, the comment has received alot of attention over the past 24 hours. But it seems Moesha isn’t quite done with her “soul winning” as she comments again under a post made by Sandra Ankobiah which has prompted Nana Aba to come to the rescue of her friend. 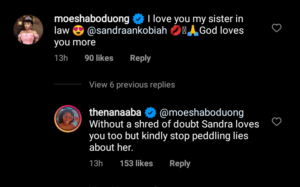 After Moesha’s latest comment in which she said “I love you my sister in law (Sandra Ankobiah), God loves you more”, Nana Aba Anamoah couldn’t hell but intervene.

The journalist sent some strong warning to the repented Moesha Buduong saying “Without a shred of doubt Sandra loves you too but kindly stop peddling lies about her”.