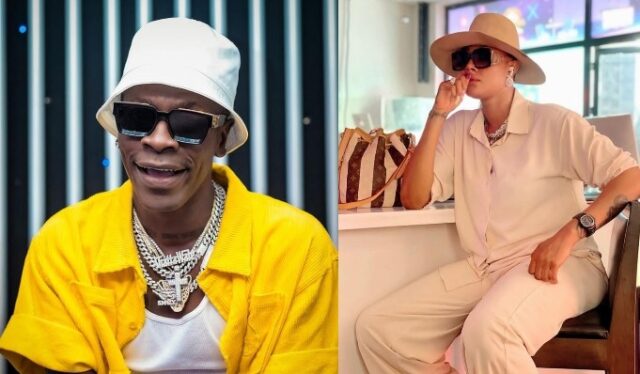 Shatta Wale appreciates the love he got from a fan/ friend all the way in Nigeria in actress Angela Okorie who was among the few celebrities who campaigned for his release from prison.

According to him, the bond between him and the nollywood actress is forever.

RELATED POST:   "He Is A Man, There Is Nothing Wrong If I'm Dating Him"-Araba Atta Confesses Her Feelings For Don Little [Watch Video]

Self acclaimed Ghanaian dancehall King, Shatta Wale found himself on the wrong side of the law about a week ago. His crime was that he alleged through his assistants to have been shot by unknown gun men on the 18th of October.

He was subsequently arrested for causing fear and panic because he is a public figure. So whiles in Prison, nollywood actress, Angela Okorie was among the few public figures who campaigned for his release.

She lamented that Shatta Wale did not kill any body and that he should be released. She spoke highly of the Dancehall King and how much she likes him.

Fast-forward to today, just about two days after his release and it seems he just got know of the nice words that was said about him by the Nigerian actress.

As a way of showing appreciation for the support and love, he posted a picture of Angela Okorie with the caption “The bond between us is forever.. Thanks for being there for me love. @realangelaokorie #Freethematter

Who Are You To Tell Me To Stop Wearing Kilts, What Do You Have? Osebor To Critics [Video]