What ever it is that Criss Waddle did to Showboy must have really pi$$ed him off as he keeps throwing all kinds of shots at his former boss.

He is at it again this morning as he fires fresh shots at his former boss of AMG business.

Showboy, who is currently serving jail time in the USA for stabbing Junior US feels betrayed by his former crew members.

While away, he seems to be on a mission to torment his former boss for abandoning him to suffer alone. 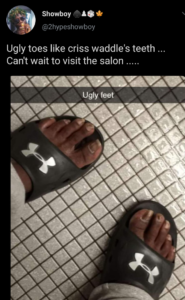 READ ALSO: Showboy Compares Criss Waddle To Hushpuppi, Says He Is A Liar And A Scammer.

This time around, he compared his unkempt toes to that of the teeth of Criss Waddle.

Reason being that Criss Waddle normally wears braces to correct his teeth hence chose to draw similarities between his toes and Criss Waddle’s teeth.

He fired this fresh shots on twitter saying “Ugly toes like Criss Waddles Teeth. Can’t wait to visit the salon” .

If I Ever Become An Option, Don’t Choose Me – Fella Makafui Says As She Dazzles In Fresh Set Of Photos