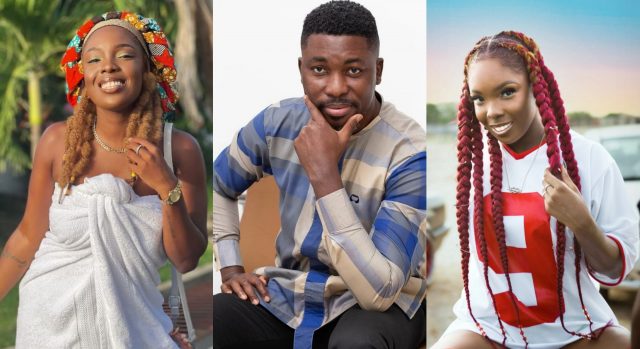 Kwame A-Plus goes in hard on Feli Nuna few weeks after their spat on the United Showbiz Show, calls her out as a l£sbian, Bi and a feminist at the same time.

Things became heated on the United Showbiz Show a few weeks ago between Kwame A-Plus and Feli Nuna after the former tried to insult the boyfriend of the singer on live TV. Since then, there has been a lot of commentary about the incidence with lots of Ghanaians supporting the singer.

RELATED POST:   Your Song Didn't Hit Despite What I Did For You On UTV - Kwame A-Plus Shades Feli Nuna

However, an unapologetic Kwame A-Plus seems to be enjoying all this as he attacks the singer again, says her problem is spiritual and that she must visit a prayer camp to cast out some demons. He added that, he is surprised that a beautiful ewe lady like her can choose to be a lesbian, Bi and a feminist at the same time.

He made these comments on his official facebook page that reads “Your song could not hit after everything I did for you on UTV. Stiiiill even your mother doesn’t know that you have a new song. Ungrateful girl !

Madam, your problem is spiritual. Stop running desperately from media house to media house. You should be in a prayer camp casting out demonds from your life by now. I’m only posting this to see if I can help you trend. You can also respond. Maybe so 2 by 4 media houses will start talking about you.

If you no hit after this post dia me I no know what I go fit do for you again ooo. Unless you commot that three three cedis towel from your head and walk “naket”.

A man is a man!! A man and a woman are not the same in anything. Any woman who does not respect men is in a fight with me. Mempɛ gay, mempɛ lesbian. Mempɛ feminists.” He concluded. 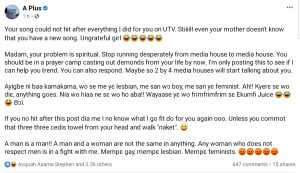