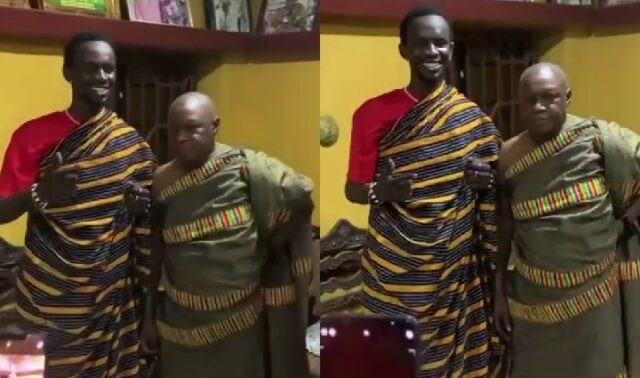 Head of the “sad boys gang”, Black Sherif was given a royal welcome by the paramount chief of Ahafo Goaso as he replaces his famous do-rag with Kente.

Black Sherif has been tagged as the man of the moment for some time now since the release of his first and second sermons that became instant hits in the country and beyond.

Through this breakthrough, “sad boy” is now happy as he is now making good money from his music and gets to perform on the regular at shows.

It was on one of such trips to perform at a show that he paid a courtesy call on the paramount chief of Ahafo Goaso Nana Kwesi Bosompra I.

The Chief appears to be a big fan as he gave Black Sherif a royal welcome and replaced his trademark do-rag with Kente.