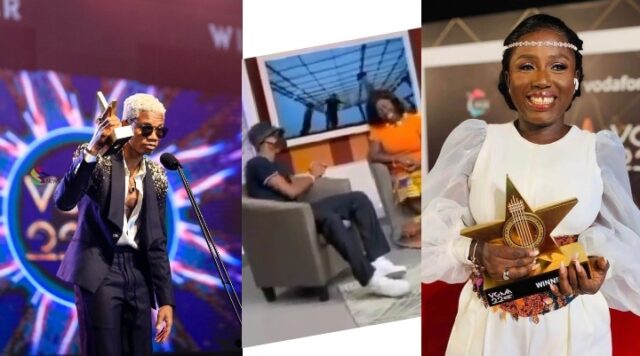 After all, it’s just an awards scheme as Diana Hamilton and Kidi clash on live TV for the first time after the Vodafone Ghana Music Awards where the former beat the later to the artiste of the year award.

Diana Hamilton made history on Saturday night when she was crowned as the artiste of the year beating off competition from the likes of Kidi, Medikal, Sarkodie, etc.

At the time the winner was announced, Kidi who was certain to win the artiste of the year angrily walked out of the auditorium showing how disappointed he was. And as usual was trolled massively by netizens.

He was however strong enough to come back the following morning jaming to Diana Hamilton’s Adom and joining in on the trolls as well.

Fans who may think these two artistes will automatically be foes because one won an award over the other are mistaken as this video goes to show how matured they both are. As it’s normally done, award winners try to go on a thank you tour to as many media houses as they can to show appreciation for the awards they helped them win.