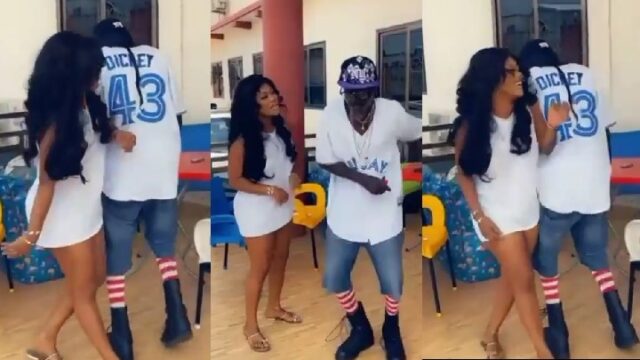 Kumawood comic actor, Kwadwo Nkansah Lil Win who also doubles as a musician has long being tagged as the boyfriend of Sandra Ababio.

However, they have both denied such rumours and it appears they are not too worried about such rumours anyways as they were seen happily dancing to Lil Win’s new song.

READ ALSO: GMB 2021: Manu Proving Why She Deserved The Crown With These Lovely Photos

Lil Win who has being trying to revive the kumawood movie industry is currently on set shooting a new series titled “Papano”.

However, whiles on set, he decided to teach Sandra Ababio some dance moves in a challenge he calls #JollofandAfrobeat

RELATED POST:   [Video] Yvonne Nelson Explains Why It's Better To Have A Baby With A Friend Than Someone You Love Or Is Attached To