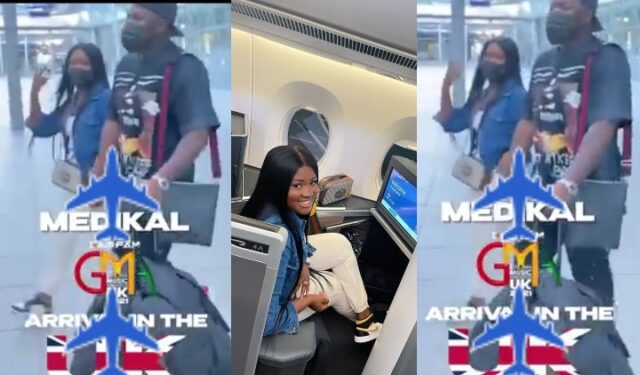 Medikal and his beautiful wife, Fella Makafui have arrived safely in London for this year’s Ghana Music Awards UK that is happening over the weekend.

The Frimpong’s booked an early flight to London today in preparation towards the Ghana Music Awards UK that is happening on 9th October.

Medikal and Fella Makafui were rumoured to be fighting just about two months ago. However, it doesn’t look like those rumours were true as they both go about their daily activities as couples do.

READ ALSO: “The Devil Is A Liar”- Akuapem Poloo Says After What Happened When She Announced Her Feature With AMG Armani [Watch Video]

Medikal posted Fella Makafui on social media on her birthday when many thought he wouldn’t. Fella Makafui was also with Medikal at his show recently to again quash the fighting rumours.

And now they are together in London for the Ghana Music Awards UK which Medikal will be hoping to grab some awards.