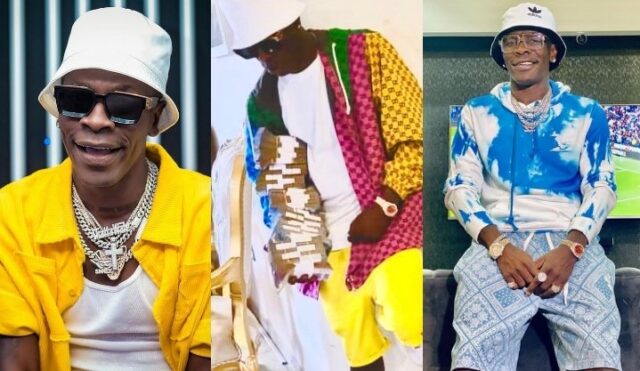 Shatta Wale, who is known for spraying cash on his fans occasionally is at it again as he sprays some cash on a group of bikers who followed him home last night.

The self acclaimed dancehall King and the richest musician in Ghana always tries to prove his wealth with his luxury lifestyle. He almost always does well to flaunt his wealth when he gets the chance.

According to him, it is the fans who gave him all the money he had now hence he always feels obligated to give back to them.

He was in his elements again last night when a group of bikers followed him home after they saw him in town.

He made this known in an instagram post where he claimed he was coming from a friend’s place late in the night and was given a chase by a group of bikers to his house.

Due to security reasons, he left them outside but decided to surprise them with some cash whiles they waited outside. He also took the opportunity to flaunt his Rolex watch and his “swimming pool” (haha)

RELATED POST:   "Teach Me Your Ways And I'll Teach You Mine"-Nasty Blaq To Yvonne Nelson As They Flirt Online. [Photos]