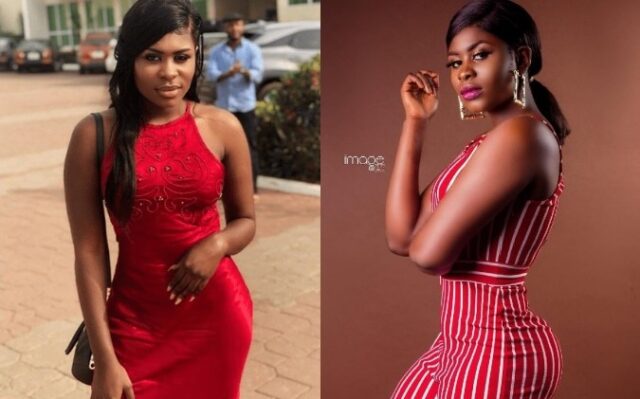 Yaa Jackson appears to have turned death ears to what is happening around her as she gave a free show of her melons whiles she performed on stage.

Yaa Jackson is the daughter of the legendary kumawood movie producer and director Jackson K Bentum who introduced her into acting at a very young age.

READ ALSO: “Give Thanks To Fraud Not Your Effort”- Medikal Blasted For Saying He Misses Being Broke

She is well loved by lots of Ghanaians due to how well she played her roles even at a young age. However she has now diverted into music and her new lifestyle has got people talking.

Her younger brother Nyame K Jackson, who is an evangelist recently alleged that she was being used by Satan. He spoke about how he feels embarrassed to see the kind of lifestyle his sister is living although he claimed she wishes to change.

Fast forward to last night and Yaa Jackson is spotted on stage performing in a costume that has left her melons falling out for the cheering fans to “shine their eyes”. From the video making rounds on the internet, Yaa Jackson clearly didn’t look like someone who wishes to change.

RELATED POST:   Kidi Finally Explains Why He Lost Artiste Of The Year Award At The VGMA's.

Who Are You To Tell Me To Stop Wearing Kilts, What Do You Have? Osebor To Critics [Video]