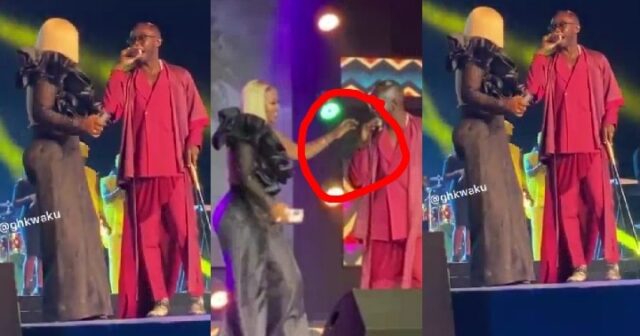 The Vodafone Ghana Music Awards has always been fun amidst several controversies and yesterday’s event was no exception as the night saw some 13 awards given to winners of the various categories.

One interesting thing that happened last night was the reunion of ex-lovers, Nana Ama McBrown and Okyeame Kwame on stage. Nana Ama McBrown like you all know has a thing for music hence decided to join her exboyfriend to perform one of his songs.

However, Okyeame Kwame smartly refused to give his microphone to his ex for reasons best known to him. The incident happened so briefly that not alot of people noticed it. Nana Ama McBrown was also smart enough to pretend as though she was raising her hands whiles dancing.

In all, it was a good performance from these two and much of the talk from last night’s event is about their reunion.