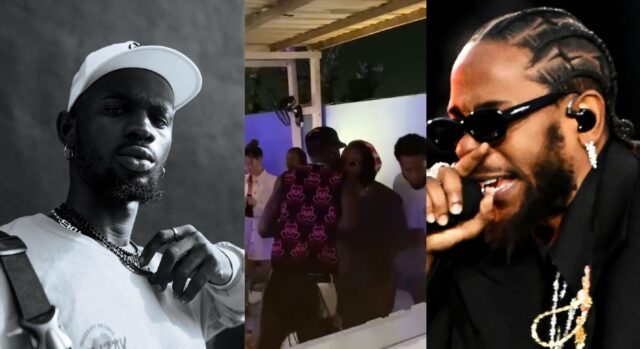 Black Sherif, otherwise known as Kweku the traveller is on the move as he met up with American rapper, Kendrick Lamar last night at his album listening in Accra. Ever since he (Black Sherif) blew up in 2021 with his first and Second Sermons, Black Sherif has been climbing higher and higher.

Within the short period that he has been in the music industry, Black Sherif has had encounters with some global acts like Burna Boy, Rick Ross and now Kendrick Lamar. The American rapper is in Ghana to promote his Mr. Morale & the Big Steppers album which was released on the 13th of May.

RELATED POST:   (Video)Black Sherif On The Move As He Meets Up With American Rapper, Kendrick Lamar
”]

There was an album listening session held in the country which was attended by other musicians including Black Sherif. But this very one has got fans wishing for more and hoping for a collabo with the American rapper very soon. Well that’s something we will all want to see.