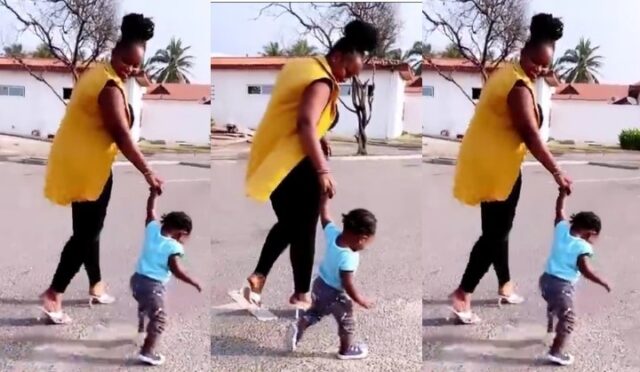 Beautiful scenes as the baby boy of YOLO star Aaron Adatsi goes for a walk with his mom a day after he turned one.

Aaron Adatsi of YOLO fame made headlines around this same time last year when news of him welcoming a child with his girlfriend broke.

READ ALSO: Yaa Jackson Gives Bizarre Reason Why Girls Cheat In A Relationship After Allowing Guy To Grind Her.

Ordinarily, this shouldn’t be a big deal. However, due to his role in the YOLO TV series where he preached abstinence, it was surprising to see him do the opposite in real life.

The pressure from his fans and Ghanaians at large was so high that he had to make a statement to address the issue.

Fast forward to 2021 and his baby boy is seen going on a walk just a day after he turned one. It is beautiful to see how fast time goes and how quickly their son is growing.

Indeed the baby boy is walking in Miracles barely a year after he was born.