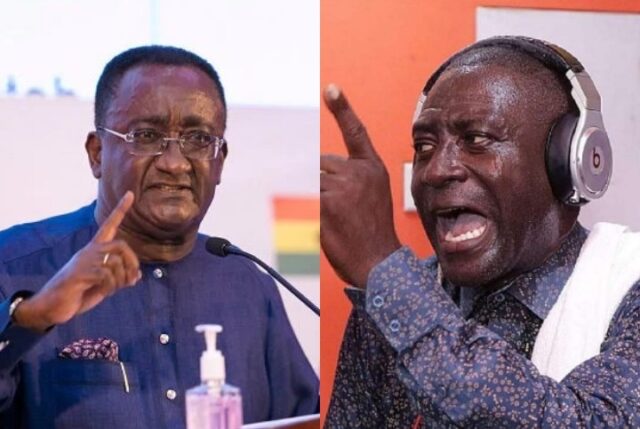 The ever talking Captain Smart is angry and this time around he is angry at the Minister for Food and Agriculture, Hon. Afriyie Akoto who has ambitions of becoming President of Ghana one day.

As he normally does by addressing national issues, Captain Smart took his anger to the Minister for Food and Agriculture for some comments he made recently.

The Hon. Minister suggested that he saw donkeys unaided carrying fertilizers to Burkina Faso which has got Ghanaians talking. Although funny, it tells of the state that Ghana is in. according to the Minister though he saw the donkeys he couldn’t question the donkeys. Laughable, right?

According to Captain Smart, though the minister is his friend he feels the minister is not a serious candidate and shouldn’t even dare to contest the NPP primaries and could never become president.

“What am I hearing about Afriyie Akoto?.You are my close friend. Your dumbness is too much. How can you say donkeys were carrying fertilizers? You told Ghanaians that Planting for Food and Jobs has brought a lot of food and now see what is happening. Akoto, don’t deceive yourself. You can never become President. If you get 3% I will buy a sheep for you. I told Nana that one of the things that will fail him are incompetent people. Nana, are you a happy man?” Captain Smart said

The NPP race will be tightly contested as Vice President Bawumia and Alan Kyerematen look set to battle it out.