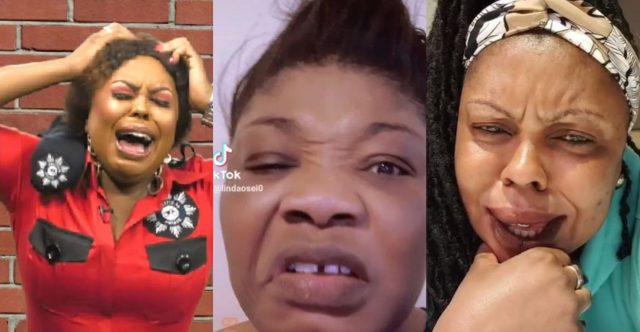 An known friend of Afia Schwarzenegger allegedly lost her pregnancy after she sent her to see a ritualist in the north for protection according to a latest revelation by Linda Osei.

There is currently an ongoing beef between Linda Osei who is based in Manchester in the UK and Afia Schwarzenegger with the former accusing the later of being the reason behind her friends miscarriage.

In a fresh video shared by Linda, she can be seen in a heated mode going in hard on her nemesis, Afia Schwarzenegger. According to her, a friend of the comedienne allegedly lost her pregnancy after she sent her to the North to see a native doctor for protection.

She claimed in the video that after her friend lost her pregnancy, she collected her blood and sent it home and that she still drinks it. Since she made those comments, there are a few rumours that the said friend is Tracey Boakye. Well, we cannot confirm that yet hence only remains an allegation.

This recent back and forth between Afia Schwarzenegger and Linda Osei started after the former cursed those who were speculating that she had sent her adopted daughter, Pena to her biological parents. Upon hearing that Afia had cursed all those speculating such rumours, Linda recorded  video of her own saying that the curses will not work .